What the New 1.2B Clippers Area Means for the City of Inglewood 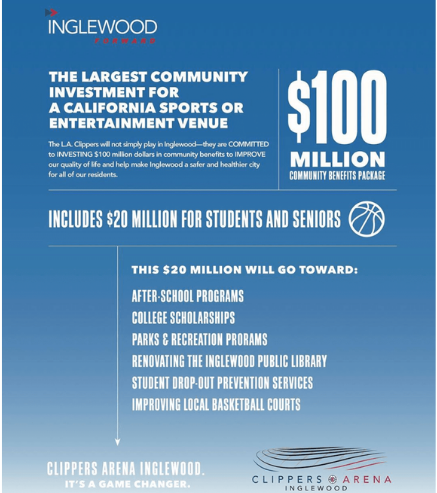 The California Air Resources Board recently approved the 1.2 billion dollar Clippers Arena to be built in the City of Inglewood and upon doing so, Mayor Butts declared “Like the Phoenix, Inglewood continues to rise”.  Although there are many who say this continued rise comes with a cost, when you look back to where Inglewood was less than a decade ago, you can at least appreciate his sentiments behind the statement.  When Mayor Butts entered office in January of 2011, the city was on the verge of bankruptcy, the Inglewood Unified School District was about to be taken over by the state, and the homicide rate was double digits.  Fast forward to today, the school district although still struggling, has made some progress, and there are fewer homicides in Inglewood than in either Pasadena or Santa Monica.

Unfortunately, not everyone shares the same level of enthusiasm as the mayor, with the new arena coming to the city on the coattails of the already controversial SoFi Stadium which is scheduled for completion in the spring of 2020.  Many residents who were already worried about the gentrification taking place in Inglewood since the announcement the stadium would be built in Inglewood, now have deeper concerns to consider with another sports venue coming to the city.

The largest holdup in the approval process was the proposed negative environmental impact the arena would have on the city.  It was ultimately granted the green light with Clippers’ owner Steve Ballmer’s assurance that the project would be designed as a net-zero greenhouse gas emitter.  To back that commitment, Ballmer has agreed to invest 100 million dollars into the City of Inglewood.

Twenty million dollars has been allocated to improve the air quality in the city, which will include the following:

There are also plans to renovate the Inglewood Public Library, after-school programs, college scholarships and school drop-out prevention programs,  new seniors and Parks & Recreation Department programs, and improving area public basketball courts.  In addition to this, 75 million dollars will go towards affordable housing.  Although the terms of this agreement are still in negotiations, the hope is that it will help to alleviate the growing crisis of long-time residents who are being displaced by rising rents in the same city they have called home for many years.

As always, if you ever have questions on buying/selling a home or about the current state of the LA Westside market, feel free to call/text us at 310-403-7381, or send us an email at info@lawestsidehomevalues.com.