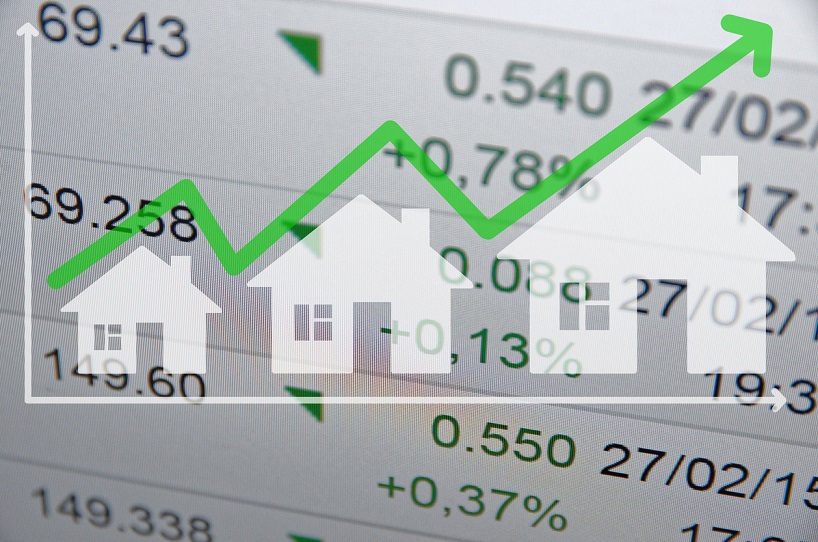 With the official beginning of the spring market underway, there are a lot of questions in the minds of prospective buyers and sellers.  Between record-breaking gas prices, the invasion of Ukraine, and a housing market that has been ablaze for almost two years straight, many potential buyers and sellers find themselves paralyzed in not knowing what to do.  “Do I buy now”?  “Do I sell now”?  Or “Should I wait until things settle down before I make a decision”?  As stated within the title, we’re going to break down the three most important factors driving today’s real estate conversation and the impact they are having on the current market: inventory, inflation, and interest rates.

INVENTORY: NOT ENOUGH TO GO AROUND

In starting with inventory, let’s look at the current real estate market.  As quoted by Altos Research “We keep looking for it, but there are absolutely no signs of a market slowdown in the data.  If anything, we’re seeing the market continue to heat up”.  This is backed up by the chart below which shows monthly inventory going back to January 2021.  What’s most striking about this graph is that in the months of November, December, and January, when we normally see a slowdown in activity, we saw the market accelerate into 2022.  This has caused many analysts to re-forecast their predictions for overall appreciation this year, which we’ll cover a bit later. 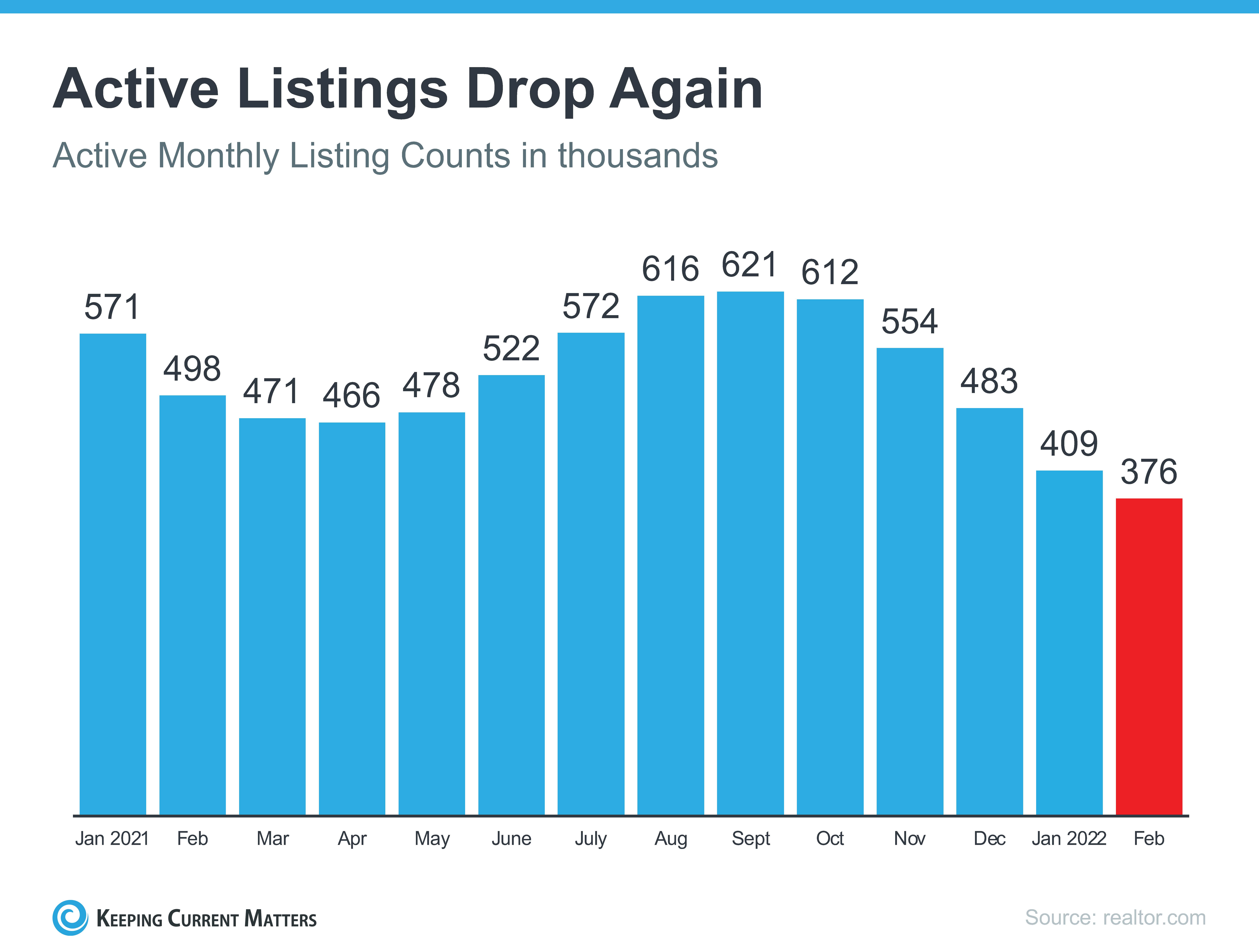 In the second graph, we start to see a slight shift.  The decrease in active listings we saw throughout 2021 continues into January and February.  In March though, we see a slight uptick in the number of active listings on the market.  In addition, from December of 21021 through March of 2022, we see a surge in new listings coming onto the market. To the point where for the month of March, new listings outpaced existing units by 52,000 for the first time in a long while.

This is likely to continue through the spring and summer markets as homeowners looking to cash out will be selling their homes.  In addition, homeowners who have concerns over rising interest rates and any potential slowdown that could cause in the market will also be looking to sell.  We’ll take a deeper dive into interest rates and their effects on the real estate market in the sections to follow. 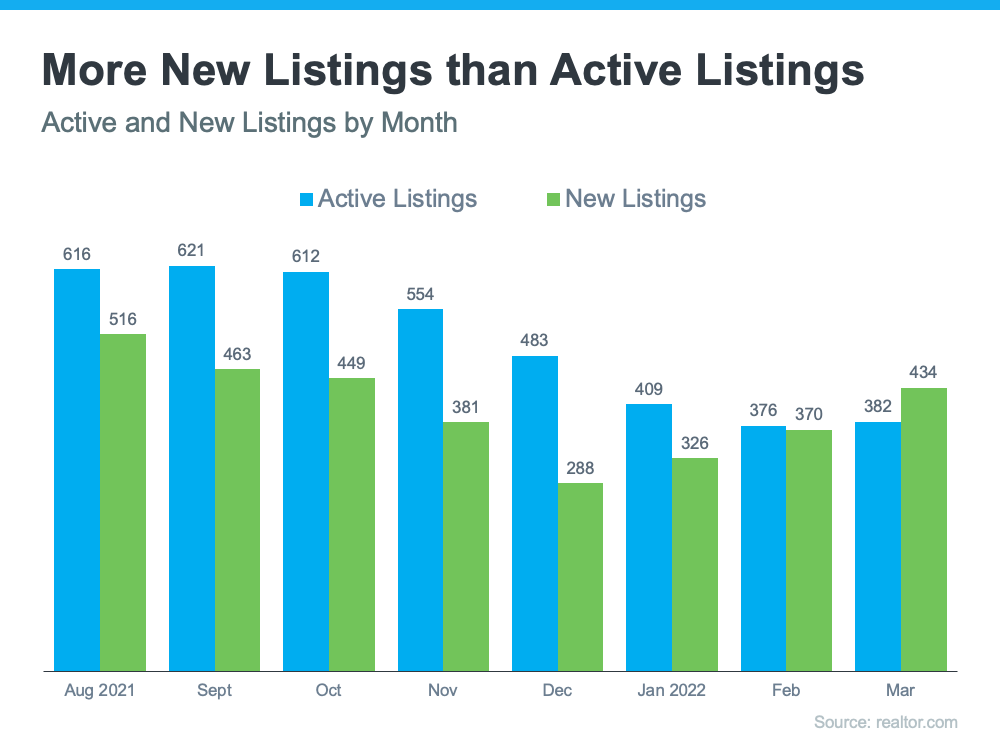 In the local LA Westside market, we still see evidence of low inventory with many properties selling in multiple offers.  This is especially the case if the property is in a good location, in good condition, and priced to sell.

This remains true in the Westside areas of Santa Monica, West LA, Palms/Mar Vista, and Culver City. Q1 data shows there was an average of two months of inventory.  With a balanced market being six months of inventory, we are still deep into a seller’s market. It would take a tremendous amount of currently unavailable inventory to begin to balance the scale.  To see the available homes, condos, and multi-units in each area of the Westside, visit LAWestsideHomeValues.com. 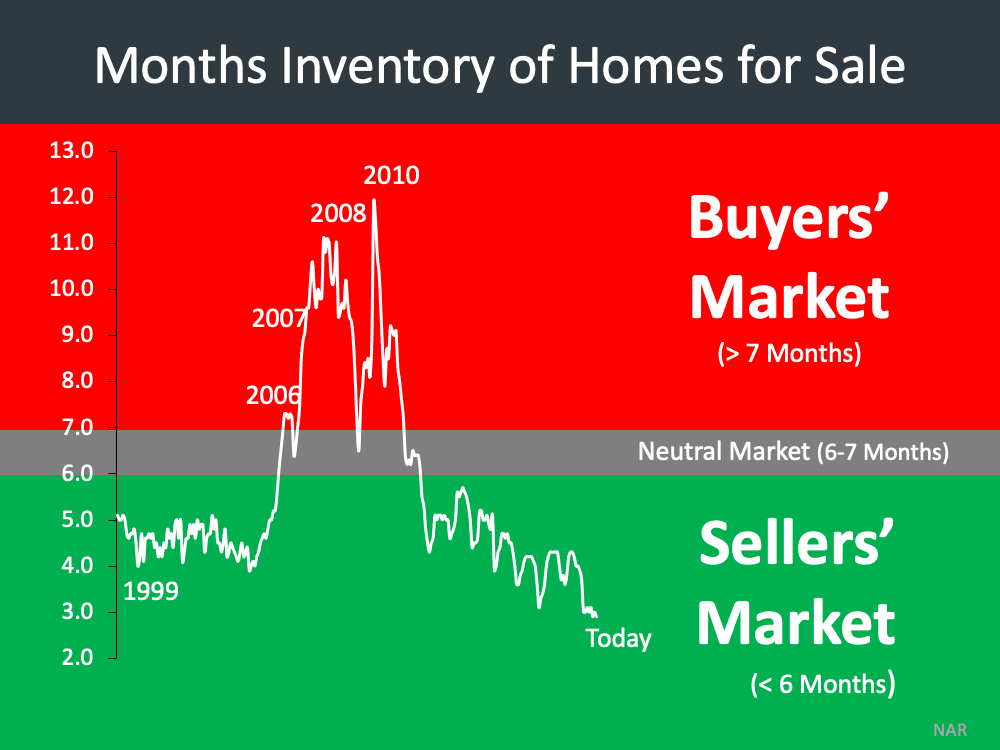 Although the expectation is that the spring and summer months will bring more inventory to the market, there will also be the traditional influx of buyers who will enter the market at the same time. This could leave things pretty much unchanged from where they are today, depending upon the impact the recent rise interest will have on the overall market.  In short, the next six months for the LA real estate market could be one of the most competitive on record.

Now that we’ve established an expected continuation of low inventory, let’s look at the one word that has been on the mind of every economist and American alike…inflation.  In 2021, we saw inflation numbers reach their highest levels in 31 years, rising all the way to 7% in December.  As of February 2022, that number has inched even higher to 7.9%.

And just when we thought things were bad enough, Russia’s invasion of Ukraine, which started on February 24th, has sent gas prices surging another 38% on top of a 40% increase realized in January.  In February 2021, the average for a gallon of gas in LA County was $3.37.  By February 2022, that number had jumped to $4.57, a 36% increase.  In searching for a bright spot in all of this, the US did see an increase in wage growth. Unfortunately, though, it was stymied by the pinch Americans were feeling in their wallets.

Inflation brings with it the downside of paying more for everything. Owning real estate though, is the one silver lining that has consistently managed to battle its negative effects. For decades now, real estate has always been considered one of the best hedges against inflation.  Mark P. Cussen, Financial Writer, Investopedia, was recently quoted as saying: “Real estate is one of the time-honored inflation hedges. It’s a tangible asset and those tend to hold their value when inflation reigns, unlike paper assets.  More specifically, as inflation rises, so do property values”.

The graph below shows a 50-year historical view of how home values have fared during inflationary times.  In looking at the information, you can see that over the last six decades, real estate has matched or exceeded the rate of inflation, with the biggest disparities being over the last two years.  In 2020, we saw home appreciation outpace inflation 9.2% to 1.4%, a 6.6% difference.  For 2021, that difference was a whopping 11.2%. Home appreciation was 18% for the year while inflation was at 6.8%.  Analysts like the Federal Planning Bureau forecast inflation for this year to remain in the low 7’s. Many real estate analysts are also calling for home appreciation of at least that amount. Should this hold true, we’ll see what has remained consistent over the last 5 decades, be the case for 2022. 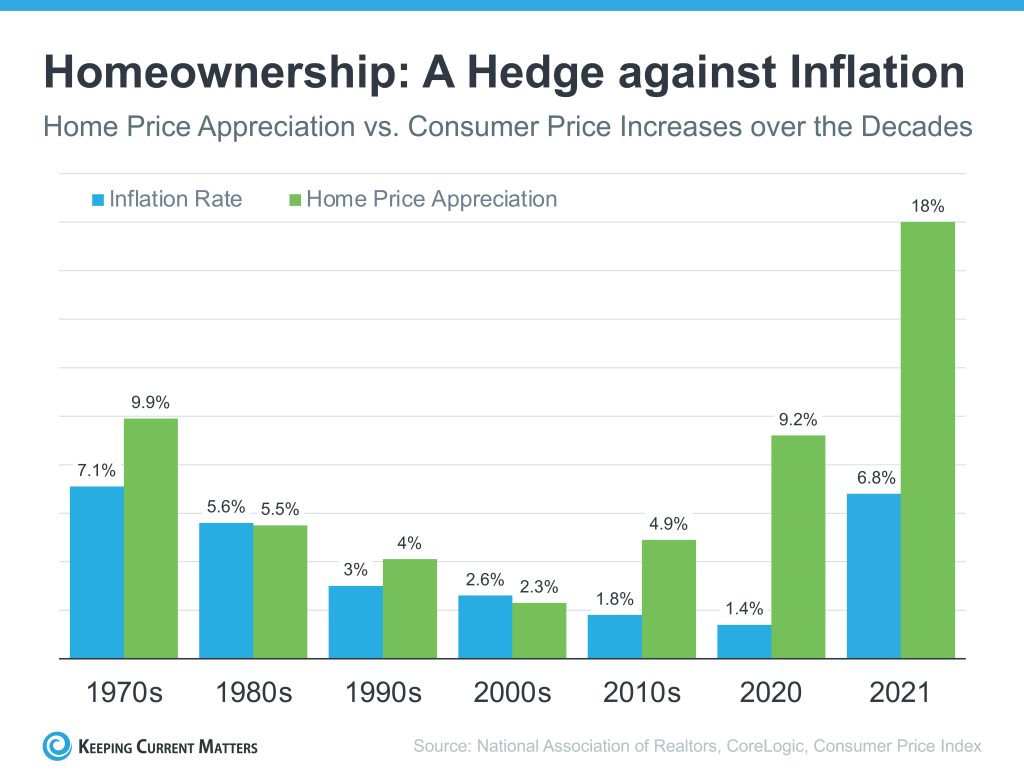 THE RISE AND RISE OF INTEREST RATES & APPRECIATION

Now that we’ve discussed inventory and inflation, let’s take a look at interest rates. Interest rates are the amount a lender charges a borrower and is a percentage of the principal i.e., the amount loaned.  Outside of a homebuyer’s income, the interest rate they receive on a loan is the largest determining factor in how much home they can afford.  Low-interest rates increase a person’s buying power, higher interest rates decrease it.  A general rule of thumb to explain this is that for every 1% increase in a borrower’s interest rate, their  buying power is decreased by 10%.

This has been especially true throughout LA where the median price of a home in LA County started 2022 at $825,000, which has posed challenges for buyers at all price points, especially first-time buyers looking to purchase a home or condo below the $500,000 mark.  What’s important to remember is that interest rates as the stock market, can be volatile and move sharply in either direction without much notice.  Real estate markets, on the other hand, tend to move more slowly.  Leading indicators such as changes in the number of homes available, under contract, and closing, can often foreshadow with accuracy, a change in the market to come.

The next three months will be crucial in determining how the rest of 2022 unfolds.  If we continue to see a rise in active listings to the market along with fewer home sales, it may indicate the beginnings of a market slowly starting to balance. For buyers, this would be more options to consider in an overall less competitive market of fewer properties selling in a bidding war over asking.  This would also slow the pricing of new listings coming onto the market.  The price of new listings is largely based on what has sold in the area over the last 90 days.  If those prices aren’t going up as rapidly, neither will the new homes coming onto the market. 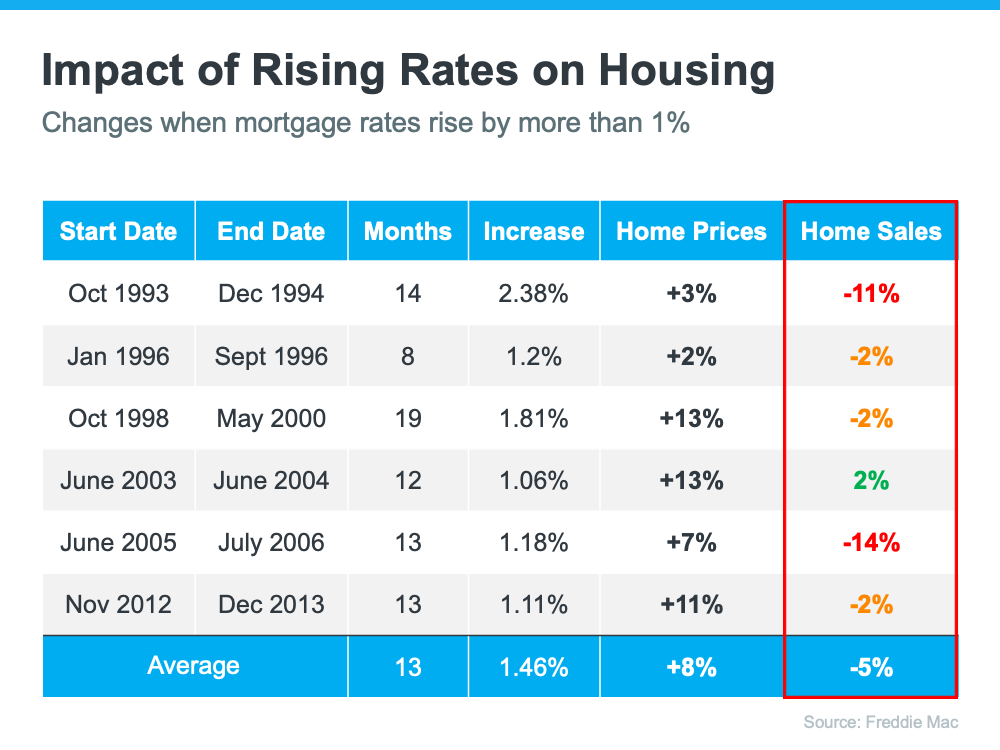 WHAT DO WE APPRECIATE? APPRECIATION

Last, and yet, not least, let’s look at home appreciation. The graph below shows what some of the top institutions in real estate had forecasted for appreciation in 2022. As of September 2021, NAR was the most bearish in estimating 3.1% appreciation nationwide. MBA was the most bullish coming in at 8.4%, while the others were all in in the low 5’s.  The blended average for all five forecasts regarding appreciation for 2022 was 5.5%. 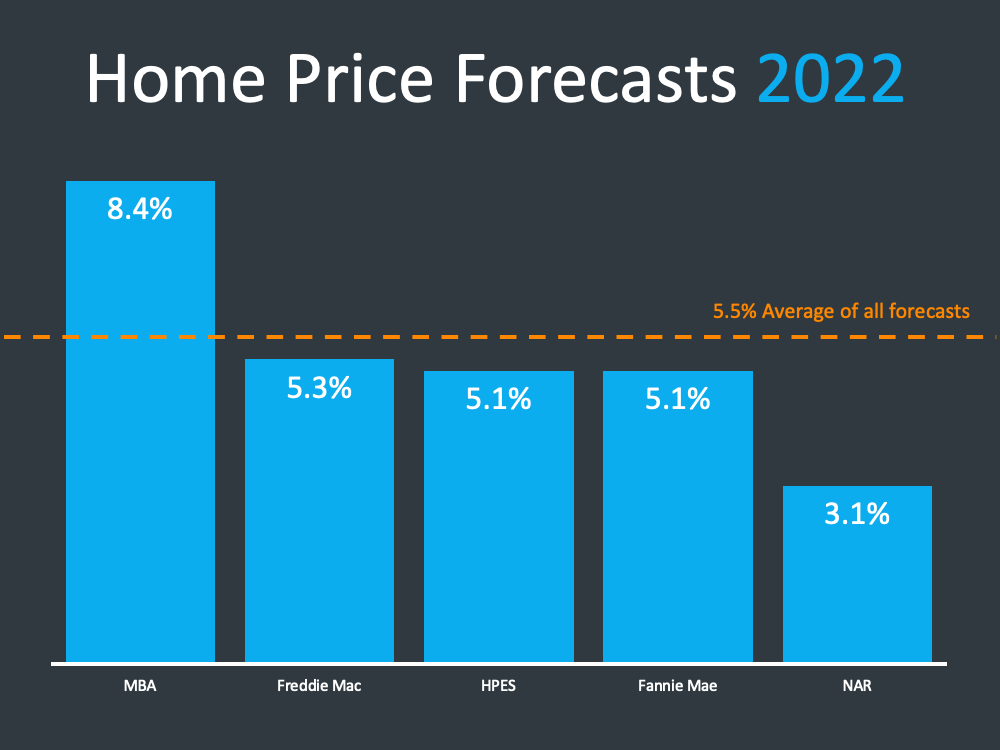 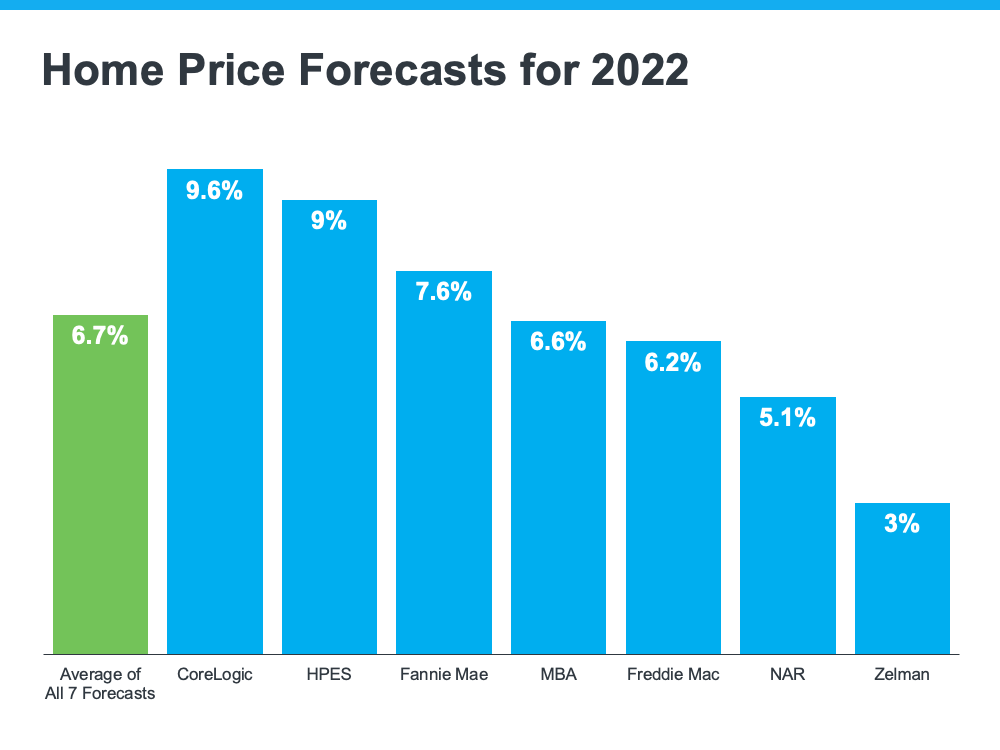 In conclusion, we’ve seen how inventory, inflation, and interest rates are affecting the current real estate market. With so many moving parts to consider, the question still remains: Do I buy, sell, or wait?  If you’re considering selling, 2022 would be the year to do so, and the sooner the better.  With home values up double digits over each of the last two years, this kind of price growth is unsustainable. At some point, all good things must come to an end.

TO SELL OR NOT TO SELL

The massive appreciation wave over the last two years will have many equity-rich homeowners looking to cash out. This is expected to cause a spike in inventory over the months to come, which should provide buyers with more options. Understand though, every owner’s situation and motivation to sell is unique. Selling earlier in the spring will offer less possible competition from a neighboring owner. This increases the chances of getting a higher price for your home with inventory being low and demand still high.

Selling later in the summer should also fare well for sellers as demand is forecasted to remain high. And yet, the next 4-6 weeks may be the best time in 2022 to sell your home. For tips on selling your home this year, check out the Seller’s Resource Page. There you’ll find insightful articles on how to increase your home’s appeal, as well 8 steps to selling your home.

TO BUY OR NOT TO BUY

If your goal is to buy a home and stay there for 7-10 years, there’s still opportunity in the market. This is despite the spike in home prices over the last two years and interest rates over the last 60 days. From a historical standpoint, they are still low, although not as low as we’ve gotten used to going back to January of 2020, when they started to drop until reaching their lowest point in December of that year.

Many buyers focus on the price of the home and pay less attention to their interest rate.  In reality, the cost of borrowing money is as important if not more than the cost of the home itself.  This is especially true if you plan on staying in the home for more than 5-6 years.

REAL ESTATE IS A LONG GAME